Kayaking the Ivel and Ouse: Part I

Having already kayaked the length of the River Ivel in the past, Dad and I had always wanted to take it one step further. We wanted to continue the journey, all the way to the mouth of the River Great Ouse, where the river meets the North Sea. After years of talking about it, we finally had the perfect opportunity to attempt it. However, the short notice meant we had less than a week to plan and organize the trip properly. Did I mention we are taking the dog? Sky will be sitting between Dads legs, as much needed moral support! 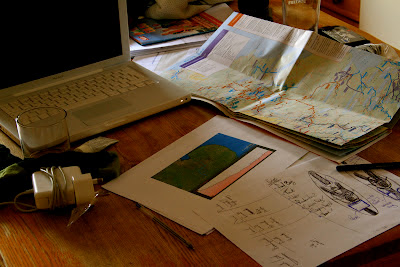 The River Ivel starts in Baldock, at the aptly named Ivel Springs. It travels north for over 20 miles, where it joins the River Great Ouse at Tempsford. The Ouse then travels East and Northeast for well over 60 more miles before hitting Kings Lynn and meeting the North Sea. We aimed to leave on the Friday, and be finished by mid-day Tuesday, camping on the riverbank along the way. This gave us less than five days kayaking to reach Kings Lynn, which meant that we would have to average about 20 miles a day to reach our target. Because the early part of the river is packed with obstructions, is rarely any deeper than your ankles, and seems to completely disappear back into the Earth itself in places, we plan to walk the first stretch from Baldock, and begin in Henlow in the kayaks. 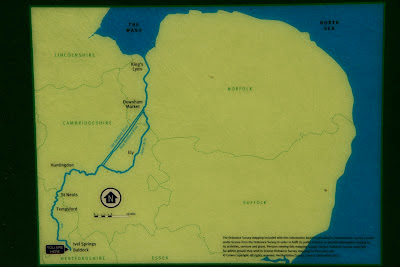 From Baldock to The Wash

The sun beat down in the early afternoon, Sky was pleased to be out, totally unaware that tomorrow morning, she will begin an 86 mile journey in a kayak. Ivel Springs Nature Reserve is packed with wild flowers this time of year. The long grasses peppered with vivid violets, reds and yellows. 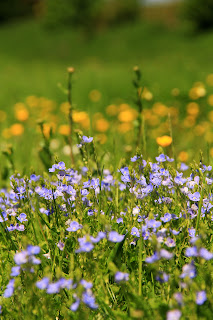 We crossed a bridge where freshwater first starts to make an appearance, as it upwells through the chalk ground. 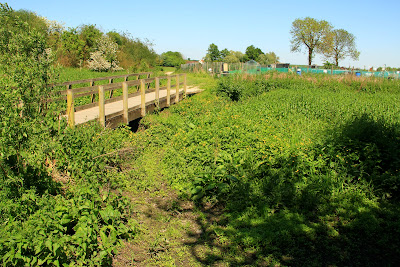 From this point, we follow a series of small, blue, circular signs, with the image of a Kingfisher printed onto them. This is the start of the Kingfisher Way, a walk that follows the length of the Ivel from Baldock to Tempsford. It was this handy trail that we followed to Henlow.

The River widens in places, often giving the appearance of a perfectly navigable river, until it turns the next bend. At Radwell the river forms a large, dead calm pool, before becoming an extremely shallow trickle, cutting through dense woodland. 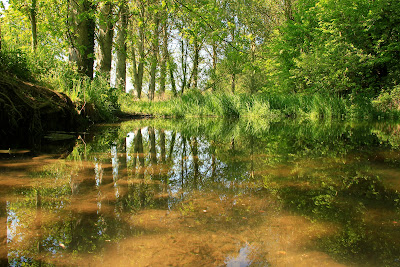 Similarly, as the path traverses through the woodland outside of Stotfold, fallen trees and over-hanging bushes and shrubs make kayaking extremely difficult, even impossible. The walk itself is still magnificent, and the river retains an ancient appearance in places, that appear to have avoided being decimated for the Ivel Valleys fertile farms and Willow trees.

The river passes through Stotfold Mill nature reserve, and appears perfect for kayaking, but it wouldn’t be long until you reach the mill, and would have to exit and carry. This continues in this pattern for a long while until it finally becomes more established by the time it has reached Henlow. We have kayaked to Henlow in the past, but spent more time carrying the kayaks than we did on the water.

It was another cracking morning. Only the odd cloud occasionally preventing the crisp sun light from showering through the tree canopy as we loaded our kayaks, and prepared for our first day on the water. 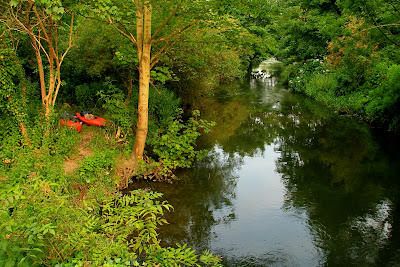 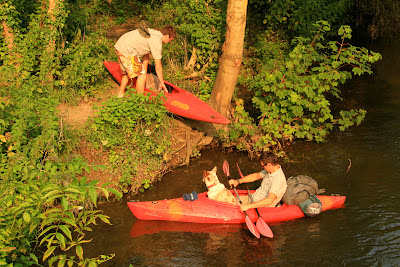 Getting in for the first time

And we were off! Many thanks go to Granddad for dropping us off with all of our gear. Plenty of smiles all round, and spirits were high as we got on our way.  It felt great to be on the water, wave goodbye, and finally be on our four and a half day trip to Kings Lynn. We cornered the first bend. And couldn’t help but crack up with laughter. A tree had recently fallen across the river. A mere one minute into the journey, and we had already had to clamber out onto the tree, carefully squeeze our kayaks under, and climb back in. This was to be the first and last obstacle of this sort; the rest of the tree fell was perfectly manageable. 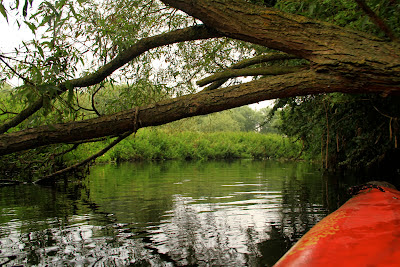 Navigating a fallen tree (we could easily get under this one!)

In fact, the overhanging trees and bushes really give this part of the river a feeling of exclusiveness, detached and hidden in the shadows from the surrounding towns and villages. And it is these fallen trees, overhanging branches and high banks that make this perfect for my favorite, and arguably the most beautifully colored, bird in the UK. The Common Kingfisher.  It’s a bit cliché to describe them as electric blue and vivid orange. But that is exactly what they are. With their long, dark, arrow-like beaks, they hunt the small fish, amphibians and insects that frequent these wonderfully clear waters.

After a short stop at Langford Garden Centre, where the Ivel Valley coffee shop kindly sponsored us a cup of coffee, we soon hit Langford Mill. By now the river had widened enough to make kayaking very pleasurable indeed. I would highly recommend kayaking here to anyone, the only downside, is the number of weirs and mills along the river. At Langford Mill, we got our first taste of what it was going to be like exiting and carrying our kayaks around. The kayaks were heavy, and probably the first time we had broken a sweat. We knew it wouldn’t be the last. 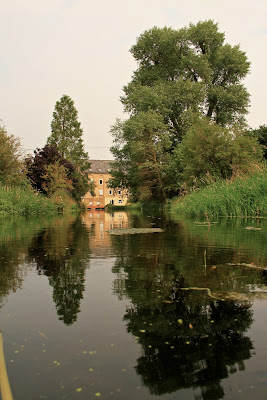 As we entered the other side, a Crayfish, likely an American Signal Crayfish, slowly crawled along the stony riverbed. These guys are an invasive species, introduced from North America, and carry a plague that our native species, the White-Clawed Crayfish, is highly susceptible to. The best way to tell them apart is by the underside of their claws; white/pink for the native species; bright red for the American Signal. 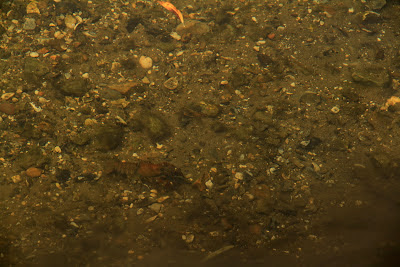 Buzzards were soaring over the fields and surrounding woodland. Swans slowly passed the kayaks in a gracious but cautious manner. Swallows skimmed the waters surface as they sipped a drink, before continuing their hunt for small insect prey. There were two Otters, one swimming in the river, and the other scuttling into the reeds and along the riverbank. Now, I cannot just casually mention the Otter sightings amongst the others without elaborating. I don’t like to be ‘species-ist’ because every animal and plant is amazing in its own right. But some animals are more special than others, which can vary depending on who you are and what you like. Otters are exactly this for me - special. I have spent many hours ‘Ottering’ on these riverbanks, and to finally see one, if brief, was still a special moment. Probably Britain's most elusive mammal, Otters have been hunted and, being top of the food chain, have suffered heavily from the chemicals and pollution that has entered our waterways. The chemicals pass up the food chain and accumulate in their bodies, making them impotent or ineffective at producing sufficient milk for young. But now, they appear to be recovering. Fingers crossed for these amazing sleek and elegant mammals, perfectly adapted to survive in our rivers (and even the sea up in the Shetlands!). 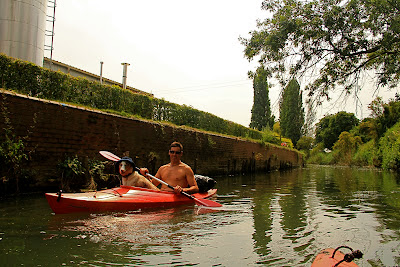 Keeping the sun out of her eyes!

We passed Broom after a sandwich and doughnut, where we had to climb out and carry once again, before heading to Biggleswade. In all of our years kayaking, we have never had a fall. Until we decide to do a massive 86-mile trip, where Dad falls on the first day as he tried to climb out on the riverbank. I caught it on video, and could not stop laughing. Sorry Dad! I am debating as to whether or not I should make the video public… 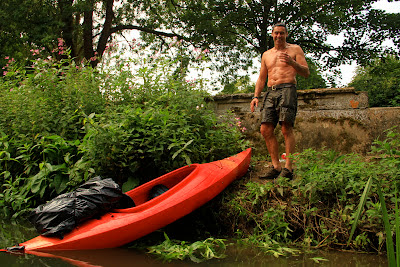 The wildlife sightings were coming in thick and fast! Between Broom and Biggleswade, a Hobby cut through the sky, circled a large tree at high speed, before dropping down to the river, snatching a Dragonfly mid flight, and just catching the surface of the water with its talons. Incredible.

It wasn’t long before we passed Sandy, where Common Terns fished in the lakes over the bank, and Herons stalked the edges of the river.  Demoiselles numbered well into the thousands, like the river had been dusted in a hyperactive emerald glitter, as they skipped across the surface. The Banded Demoiselles teaming up and fighting Beautiful Demoiselles out of their territory. They actually appear quite aggressive animals! 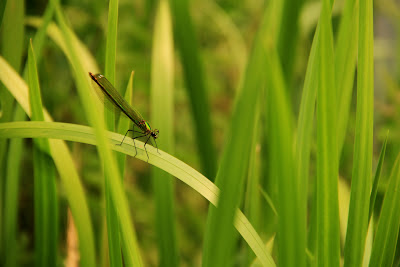 A Beautiful Demoiselle, probably feeling sorry for itself after a barrage of abuse!

We soon hit the weir at South Mills, a vertical drop. Sport kayakers can drop over the far corner, something we couldn’t risk with the size and weight of ours. 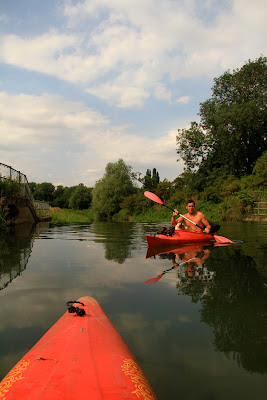 Heading for the Canoe/kayak portage point

This brief break calls for a cereal bar and some Mentos. Mentos played a big part in our lives whilst on this trip! 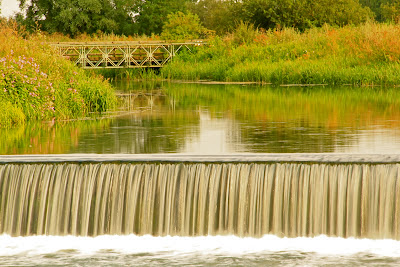 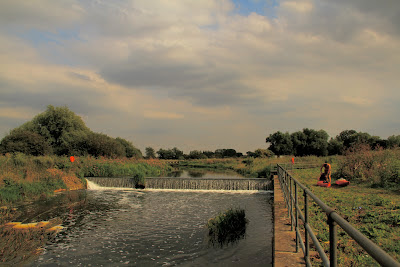 The next stretch was to be the ultimate of the day. The last push before it gets dark; bearing in mind we still needed time to be fed, watered and to setup camp. The river here is wide, with a nice gentle flow, surrounded by lots of fantastic green scenery. The stings of the nettles along the riverbank seem to have an extra potency about them. Still surrounded by the thousands of Demoiselles, we cracked on.

An hour or so later, and the sun began to drop below the scattered clouds behind the woodland in the distance. It was time to start setting up camp! 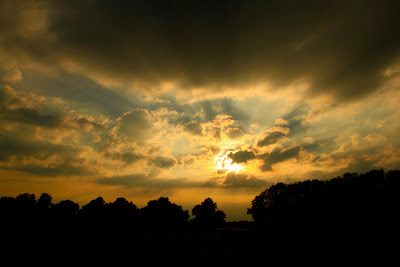 The beginnings of a wonderful sunset

Our camp was just short of Tempsford. We would reach the River Great Ouse early the next morning. We boiled up some water in a camp kettle on our small gas stove. That was one hell of a nice cup of tea! We emptied a packet of vegetable rice into the billycan as we finished our drinks. Dinner was served! 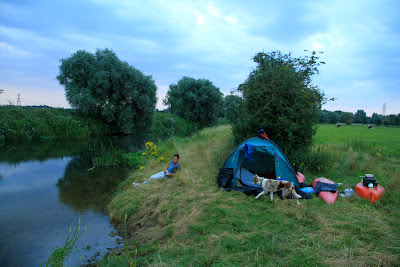 Enjoying a cup of tea after setting up camp

As the darkness set in, we decided to call it a day. We tucked into our sleeping bags, and prepared ourselves for a good night sleep on a somewhat lumpy and solid ground. We talked about the journey ahead, and reflected on the many sightings we had already had throughout our first day. We saw over ten Kingfisher sightings, trying not to include obvious sightings of the same individual. Impressive as the Kingfisher Way definitely lives up to its name. Eventually I nodded off, dreaming of electric blue and vivid orange birds darting ahead in a blurry flash...
Posted by Tom Young at 22:17