The second part of May was spent back at home, on the UK mainland, where I got to find my land-lubbing legs again. Cannot beat a nice riverside walk after being at sea on the same ship for 14 days, only stepping off every now and then for a couple of hours to grab a cup of tea and stretch the legs a bit. Along the river, amongst the recent spring growth on the woodland floor, this Green-Veined White Butterfly fed on some nectar. The vein-like appearance of its wings is created by a combination of yellow and black scales. 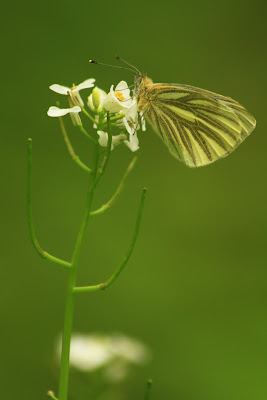 As I walked back, the dog bolted for something. Being prone to attacking anything that will run away from her, there was probably a squirrel or rabbit about. It turned out to be this little fellow taking refuge in a tree hole… 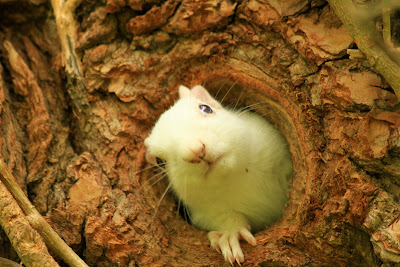 It was an albino Grey Squirrel. Or an albino Black Squirrel - I wouldn’t know how to tell ?! The only difference between Black and Grey squirrels are the colour pigment chromosomes, and this being albino, im guessing could be either of the two. I think the squirrel was also a bit dumb, either that or it was very brave, dropping down onto the branch and feeding, while the dog barked and whined in an attempt to climb the tree after it. At one point I got close enough to have been able to poke it with a short stick. I didn’t, of course.

Being a massive fan of anything to do with the South-West of our country, I was very excited to be going to North Devon for a few days with the family. Staying in Combe Martin, just outside of Exmoor. The weather was perfect as we arrived in Ilfracombe… 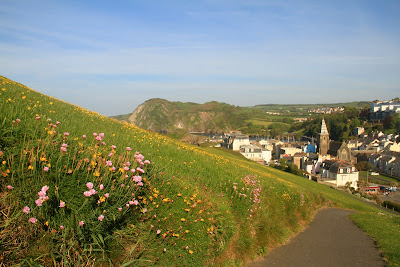 A lovely town, where I hear tales of a certain honeymoon spent here a fair few years back. A good choice I must say! The gulls are very brave here too, having to literally punch one as it dive-bombed my tray of chips. Probably the first, and hopefully last, time I have ever punched a wild animal. It was fine, the blow cushioned by its soft underside. 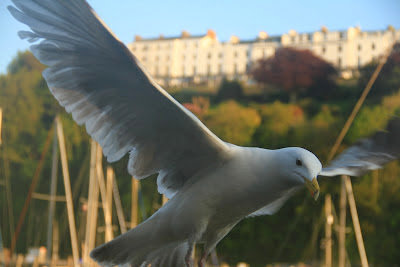 Late one evening, the clan went for a twilight stroll where we were joined by plenty of bats, probably Pipistrelles, but later, with the help of Rachaels Bat Detector, we managed to identify a few to species level based on the frequency and length of their echolocation. They are extremely hard to photograph, and below is my best effort, or should I say the luckiest effort, of a bat! 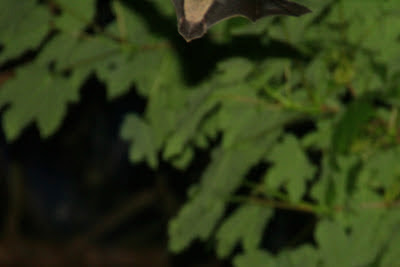 Some out of focus leaves and part of the wing… It would have been nice to spend more time with them, enough to work out their flight paths and set up some shots, but I wouldn’t like to bore the rest of the family!

The next day we headed out in the baking sunshine, up to Little Hangman along the coast path, where some of the highest sea cliffs in the UK are found.

We dropped down into the cove and spent some time kicking back on the beach. Moments later, some commotion in the skies above us. A Peregrine Falcon had stolen what looked like a Gull chick and had taken it off along the cliffs to devour it. In fact, there was a pair of Peregrine, patrolling the cliff faces. 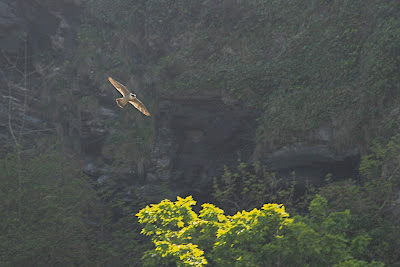 Fantastic birds, renowned for being the fastest animals on the planet, diving in the skies at up to 200mph to catch their prey. An incredible record to hold! 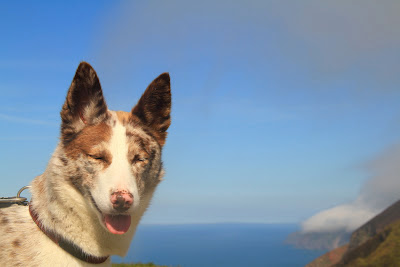 Next day we went to Woolacombe, a popular beach for the tourists! 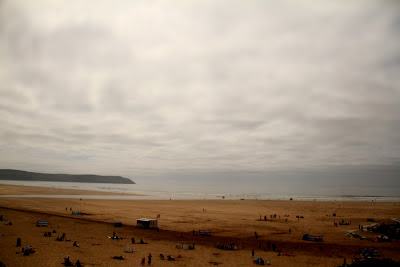 We had a pasty and an apple, and then headed back to Ilfracombe where we were to go Mackerel fishing! Of course, Haz caught the most… 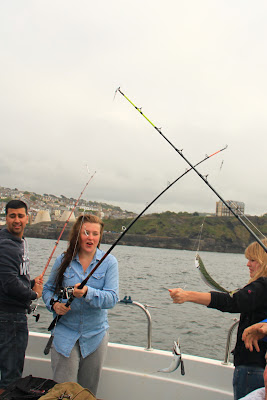 The two biggens in the middle were my first two, monsters I tell you! 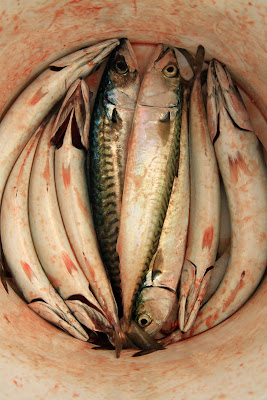 Mackerel have to be one of the greatest fish of our time, beautifully streamlined, beautifully coloured and wonderful on the BBQ! To top that off, they are one of the more sustainable fish to be had from our seas… at the moment! 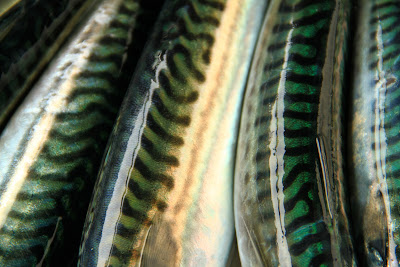 On our last day, we ventured over onto the Western part of Exmoor, where we followed a steep sided valley, a lush green with a whole host of trees, and a wonderful river winding its way through the valley to the sea. 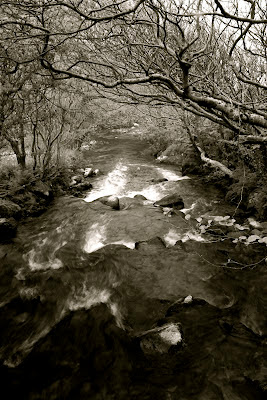 The woodland floor was coated with the amazingly smelling (and tasting!) Wild Garlic and Bluebells as well… 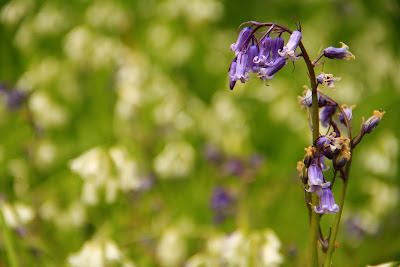 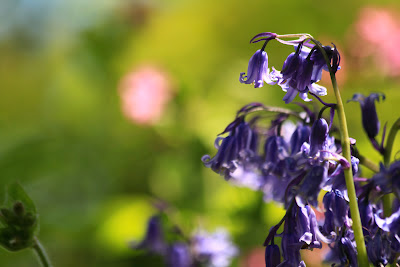 To top it off, we found a Green-Winged Orchid on the way back… 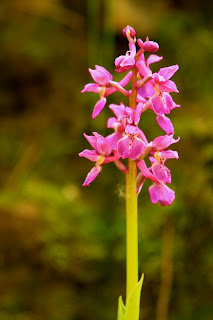 Shame about the naff photo!

Before returning back to the Cap Fin, I got a last walk in before the end of May. Walking from Baldock, back through, along the River Ivel, to Stotfold. The early flowers flowered in the wild flower meadows of the Nature Reserve in Baldock. 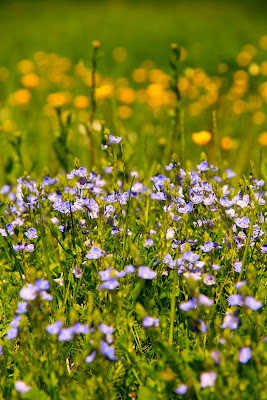 Sad to see the crap people leave behind around the Springs reserve, clearly a hot spot for binge drinking fosters and tea out of polystyrene cups! 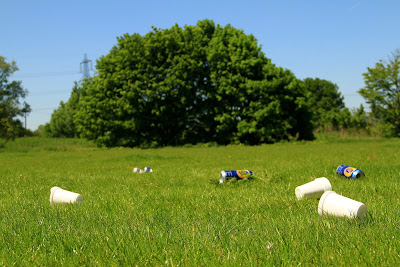 Radwell springs, and some fairly nice light for what is probably my favourite duck… The Tufted Duck! Males in their handsome black and white plumage with that glorious goldeneye and the long slick-backed tuft on top of their head. 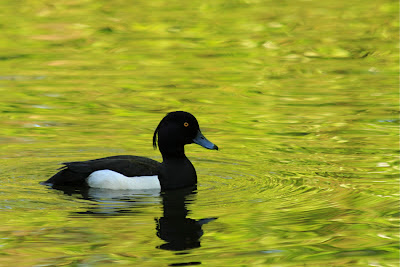 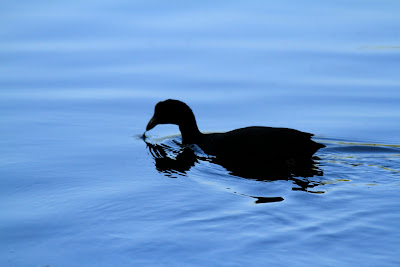 And another shot of the Tufted Duck… 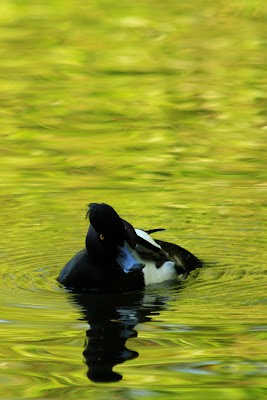 Here, a usually nocturnal Cockchafer crawls amongst some pink flowers. This one being a male cockchafer with its 7 fingers to its fan-like antennae, where females only have 6 fingers on their antennae. 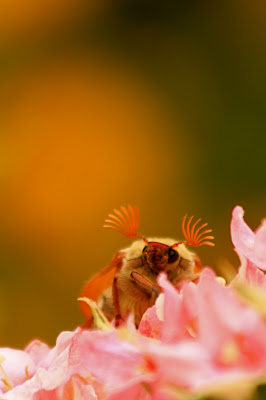 To finally end this blog, a photo of a Grey Squirrel (not albino!) on an old lamppost, raiding the birds’ fat balls. I was going to pretend I took this photo because I quite like it, but I didn’t. Haz did. Damn it. 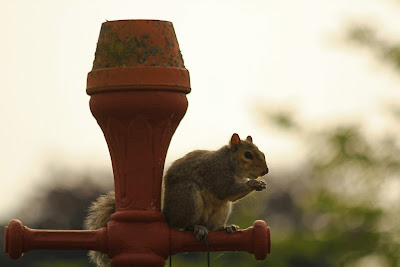