Rather than bore everyone with the tedious happenings of day-to-day occurrences, I have opted for a less regular blog, where, hopefully, there will be a lot more excitement to report, without people groaning at the sight of yet another failed attempt at a Dolphin photograph… or another wave crashing against the side of the ship!  This way, you get the highlights. All of the good stuff. Without the padded out tales of grumpy passengers, or how I have forgotten my soap bag, so had to go three days without a shower, shave, tooth clean or spray of deodorant. Needless to say, the quilt covers have turned a stale brown/green colour.

So now I am giving you the wildlife highlights of my life, this month’s first photo is of a floating wooden pallet. Great eh? 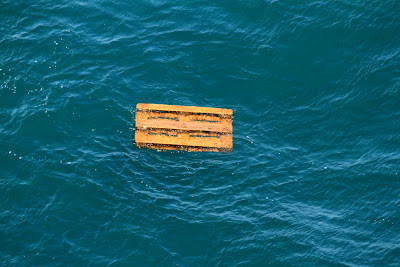 There are a lot of these floating around, amongst a lot of other pieces of crap. I saw two within an hour of each other. But these can, conversely, in a bizarre twist of fate, provide a unique form of shelter for fish in the open ocean. Young fish will school underneath, Triggerfish will actually make them home, and other larger fish will follow these in search of prey. The innocent floating crate could mean the difference between a Tuna making it from a few centimetre larvae to a full grown two metre long powerhouse of an adult or not (Info straight from the greatest natural history programme ever made – Blue Planet).

A particularly enormous sighting of a Fin Whale, right next to the ship, the closest I have ever sighted one, sparked some excitement amongst the crowds. I say crowds, more like the two people who were hardcore enough to brave the wind and rain! You can see in the next two photos its large body and fin rolling through the water. Pretty much all you get to see of these great leviathans. 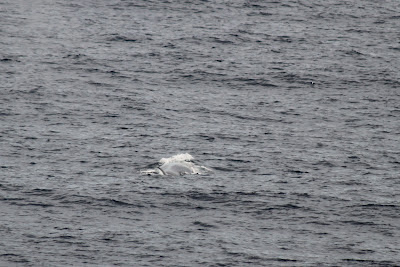 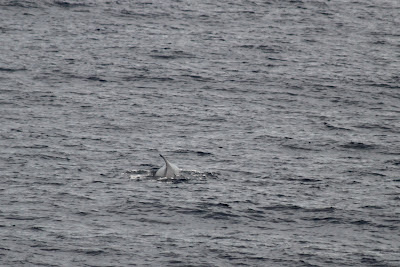 The fin Whale was undeniably amazing. But on that very same day, something happened that overshadowed any marine mammal sighting I could have had. Out from the fog laden distance, a bird slowly caught up with the ship, struggling in the wind and rain. A bird of prey. Not any old bird of prey, a Kestrel. I love birds of prey. I especially love Kestrels. Small, agile, finely tuned, perfect predators of small mammals. But this was at sea, probably at least 150 miles from land. Crazy. 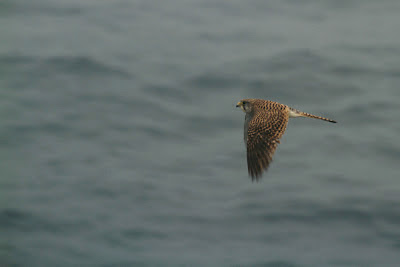 Soon the Kestrel tired of keeping up, and decided to kick back on one of the lifeboats on the side of the ship… 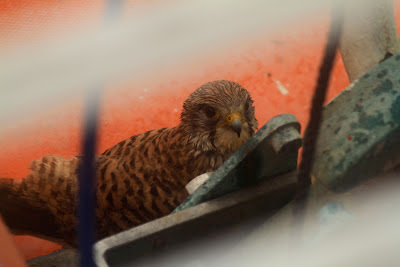 Luckily, of all the lifeboats, on all of the places across the entire ship the Kestrel could have landed, it landed on the lifeboat right outside my bedroom window! 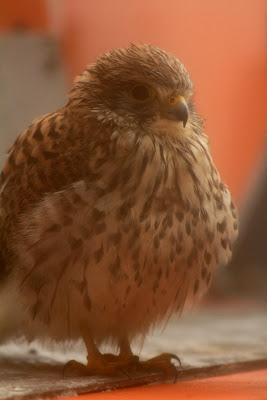 Absolutely stunning! I had been spending ages out and about back home tracking these down, and then in the middle of the ocean, one lands outside my bedroom window!!! Phwooaarrr!
After a while Kes took off, leaving me with my ruined undies to retire for the day.

I seem to remember having a stint of fair weather for a few days. Here is a pod of Striped Dolphin, keeping low as they travel through the golden tinted surface of the sea in the early hours of the morning. 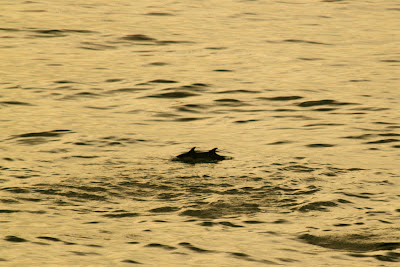 Santander is my favourite destination of the week, notable for its rather grand entrance, and wonderful sea front of the city. Here, the incredibly lush and snow-capped mountains in the Pecos National Park back a royal castle on the rocky sea front. 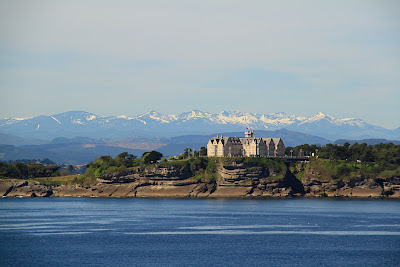 Another reason why I like Santander…  the naked statues of people scattered around the sea front. This particular fellow is diving into the sea. Not sure how well these would go down back home. 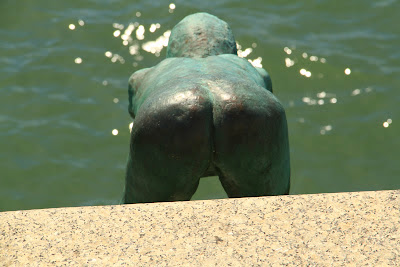 Being late spring, and everything on land already blooming, the sea was covered in miles of these giant red slicks across the surface. Plankton blooms. These tiny animals and plants explode into life as the sea begins to warm and they gorge themselves on the nutrient rich waters across the Bay of Biscay, turning the sea a lovely red colour. 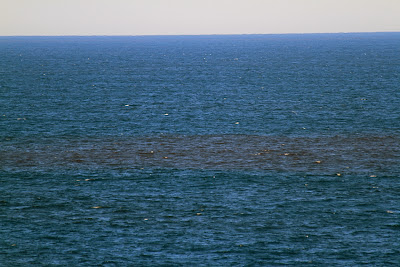 The ship sailed into another spectacular sunset as it left Portsmouth. It reminded me of the over-romanticised Brittany Ferries advert on the television. 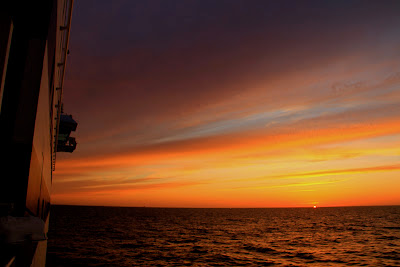 Another bird joined the ship, this time a lot smaller than the Kestrel, and a lot less likely to pummel a Bank Vole and tear its organs out. A Grey Wagtail, with its bright yellow underside, managed to keep up with the ship travelling at 45kmph. Not bad going for a little fellow, usually seen bobbing around streams and rivers. 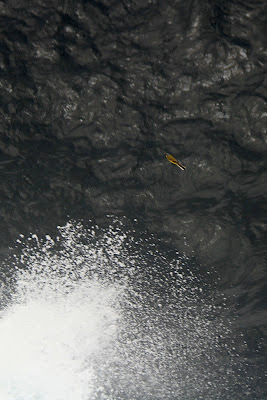 I had just put my head down and nodded off for an afternoon kip, when the phone rang. The ship manager, Audrey, seemed a little flustered and wanted me down at reception to help them. When I got there, a Collared Dove was hobbling across the floor, falling around, clearly disabled. It had flown into the ship, and probably trashed part of its spine. 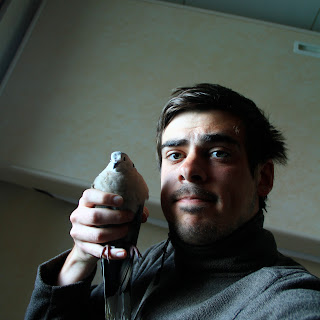 I took it to my room, with my fat face and pale forehead, and found it a box to keep it in until Audrey got off the ship and could take it to the vets. Where I believe they killed it. Should have probably killed it on the ship, saved it a day of pain and suffering, suffering and pain.

The Bay has exploded with the slightly retarded looking Sunfish or Mola Mola, the heaviest bony fish on the planet, growing over two metres from fin to fin, these guys can weigh a couple of tonne. They bask at the surface, where they are thought to be thermally recharging after deep dives in cold water. Sometimes gulls will peck parasites off of their bodies, and females of the species are known for producing more eggs than any other vertebrate on the planet. What is not to like about these insane animals? 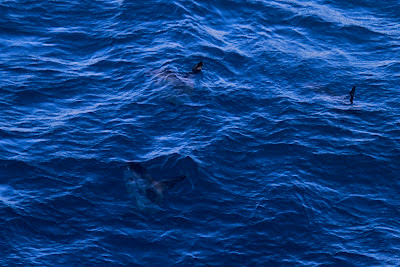 Finally some photos of Dolphins where the entire body is visible, and kind of sharp-ish! Here a Common Dolphin and its calf (behind) leap through the water. 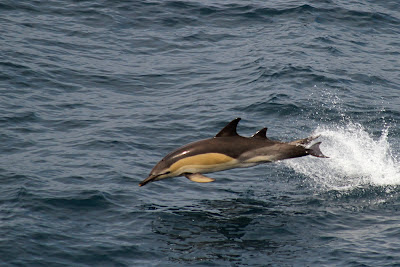 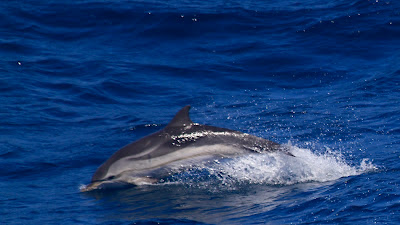 And a young Common Dolphin leaps from the surface ! 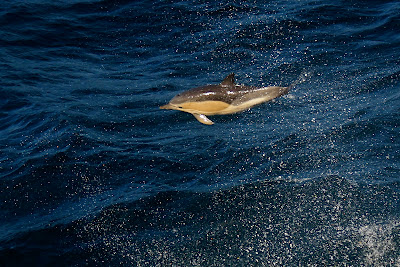 My food highlight of the month has to be the Cow tongue stew. Really nice, beefy flavour, except with a much tender texture. The skin is the only part that puts you off, being a little rough and whiter in colour.

This has been quite a long blog this one. So I will blog the adventures back on land in a second part to the month of May. Maybe next week. Probably later.