“On watching a gamboling fox cub, a fawn, an ocelot, a marten, or even a well-furred pet skunk, one is apt to be carried away and declare each in turn the most beautiful and graceful creature ever seen. But when all are gone from view, when nothing but the dim impression remains it is the otter that stands out pre-eminently as the most beautiful and engaging of all pets.” Ernest Seton, 1926

I came across the above quote whilst doing some recent research about Otters.  I have never seen an Ocelot, Marten or even a well-furred pet Skunk, but I have glimpsed an Otter, and will forever remember…

To say we slept well would be lying. We were both tired, and had fallen to sleep almost instantaneously. But the cold soon crept in, and the ground seemed to get harder and lumpier as the night went on. 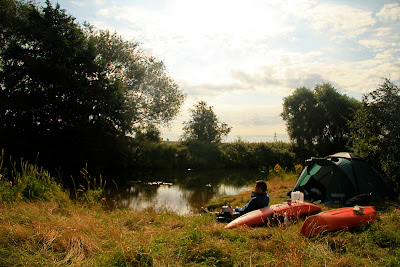 Luckily, a glorious morning welcomed us as we boiled the kettle for a mug of tea and ate our rations of cereal bars. Already Dragonflies skimmed across the surface of the water, and Butterflies flurried over the field after their thermal recharge from the early-morning sun. 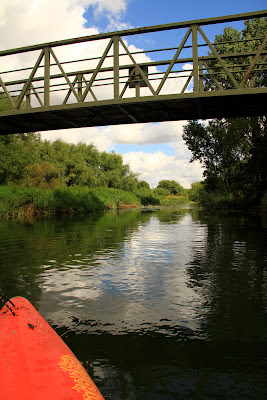 Converging with the River Great Ouse

What a beautiful morning to be on the river. We cornered the first meander and carried past a weir, before hitting the River Great Ouse at Roxton Lock. 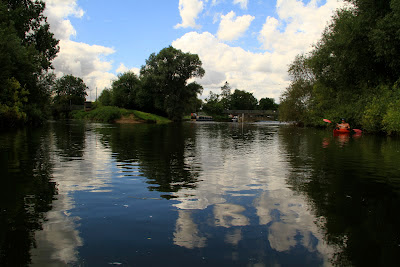 Here, the river considerably widened. Lush green woodland on either side of the river towered over us, almost like we were cutting through a hidden corridor of wildlife. The sound of our paddles cutting through the crystal calm water, as we glided over the glassy surface, added to the tranquility and beauty of the journey. The long-distant humming of traffic on the main roads was the only reminder of the modern, busy world. 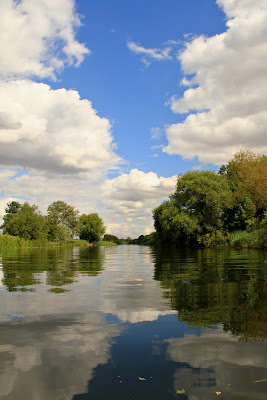 Cutting through the woodland

A Buzzard called in its mewing manner from the top of an old dead tree. It’s a comforting sound that can lift the spirits. Birds of prey have certain awe about them, with their perfect adaptations to a life on the wing, hunting with precision and power, and occasionally scavenging when the opportunity arises. Buzzards have really bounced back from the slaughter and destruction of populations in the past well, now thriving all over the country, replacing Kestrels as the most common birds of prey. 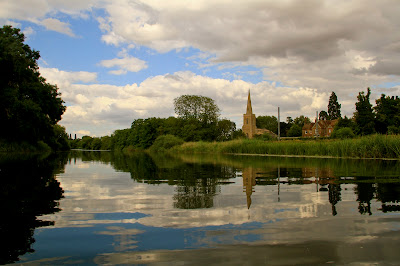 Another photo of this amazingly peaceful part of the journey

The pace was a steady one, as we made good progress throughout the day. We were extremely relieved not to have to get out and carry our kayaks as we joined another boat in our first lock. Quite a crowd gathered to watch two kayakers, with their dog, in the lock just outside of St. Neots. The guys on the boat chatted to us for a while, and invited us to join them at their mooring in St. Neots so we could nip into town to fill up our water bottles (and have a quick bacon sandwich!). 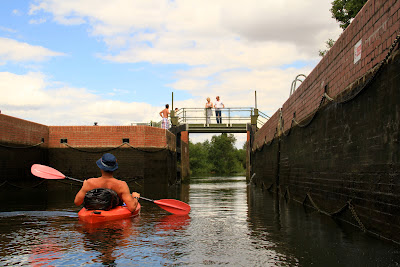 It was nice to come through the town, especially during an aptly timed river festival! We pushed on, passing the Heronry lakes. The wildlife along these stretches of water was stunning. The Demoiselles still sparkled, with noticeably more Damselflies, while the Kingfishers repeatedly flew ahead of us each time we disturbed them as we caught up with them, until they would reach the end of their territory and loop back round behind us, to carry on about their Kingfisher lives in peace.

By now our backs and bums had started to sore. As the afternoon went on, the rhythm set in. The three or four hours from St.Neots flew by, with every twist and turn of the river bringing new sights and sounds, keeping the spirits and excitement high. Occasionally we would paddle backwards to exercise different muscles and give our backs a break.

Just ahead, a Grass Snake slid across the surface from one bank to the other. Also known as the Water Snake, these amazing serpents are just at home in and around water as they are on land. With their black and yellow/orange collar, and large round pupils, these snakes are a non-venomous species, and totally harmless. Not to mention how stunningly beautiful they are! 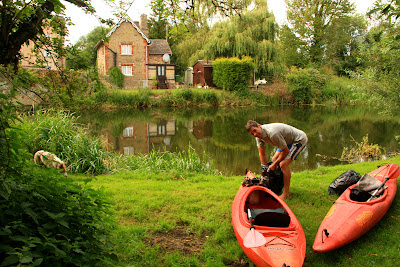 A Mentos break in Offord!

It was time for a much-needed pit stop before hitting Huntingdon, our target for the end of the day. Out came the cereal bars. Followed by a pack of Mentos, split down the middle, shared and pocketed. A much needed explosion of flavor, distracting our bodies from any tiring, as we carried on down the river.

After Godmanchester, we soon hit Huntingdon, where a handy kayak portage meant we did not have to mess around trying to find somewhere to exit and carry around the locks. A family of Mute Swans bravely approached our kayaks, clearly used to being fed by humans and spending time around them. 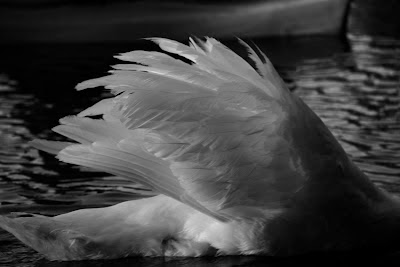 Although, the Swans were still a bit wary of the dog sitting in the bright red kayak… 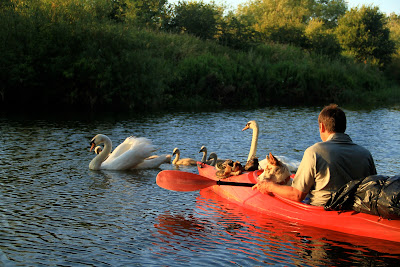 By now, the night was drawing in. The insects were forming small, buzzing clouds over the water surface as a faint mist began to rise. Time to set-up camp!

Where we had stopped, a pile of fish scales and remains on the riverbank, another potential sign of Otters on these parts of the river! I love finding tracks and signs, poo and remains. I love the smell of an Otter spraint, or finding their five-toed, slightly webbed paw prints in the mud. But what I do not love so much, is having to go to bed in a small tent, with Sky smelling of rotten fish after deciding vigorously rolling in it was a good idea. Mmm.

We drank our tea, and ate our risotto. This time, we fell asleep to the sound of a Tawny Owl calling from the other side of the River… 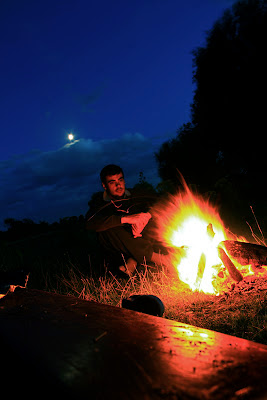 Sitting by the fire 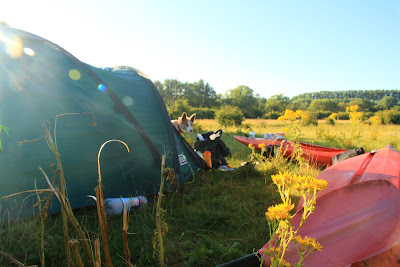 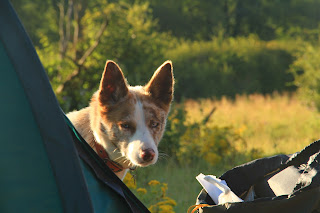 Sky emerged first thing to join us for a cup of tea. We were used to the smell of rotten fish by now (probably smelling of it ourselves). The night was surprisingly cold, and unsurprisingly lumpy. We wearily loaded our kayaks and got back on the river for our third day kayaking. 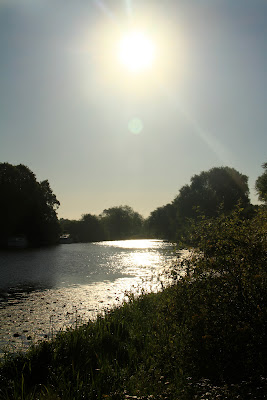 Once again, the sun was shining and the sky was beautifully clear. After a check-in with Granddad, the weather was apparently due to worsen. We passed rafts of Mallards, with plenty of mothers with their chicks. Warblers trilled in the tops of the reeds, while Moorhens and their chicks bumbled around in the depths, ducking and taking refuge on their nest built into the reeds as we pass a little too close for their comfort. 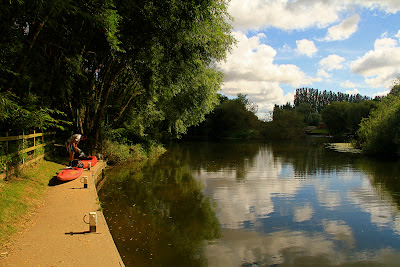 We hit a lock, exiting and carrying once again. A Spider climbed its web, seemingly delighted with today’s catch – a Meadow Brown butterfly. There is something that appears slightly more tragic about the scene. Normally it is exciting to see a Bluebottle or Hoverfly get caught and eaten by a spider. But to see something as beautiful as a butterfly succumb to the same tangled death has a certain impact on the emotions. Although flies are pretty awesome too, some beating their wings up to 1,000 times a second. Its just unfortunate they are not always as visually pleasing… 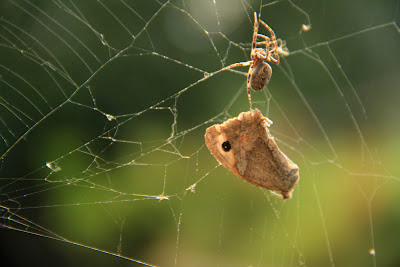 It was not long before we made St.Ives, where the boat club kindly let us fill our water bottles as we carried on through. We promised ourselves a cup of tea and a pack of Mentos after the next hour or so kayaking. Perfect motivation! 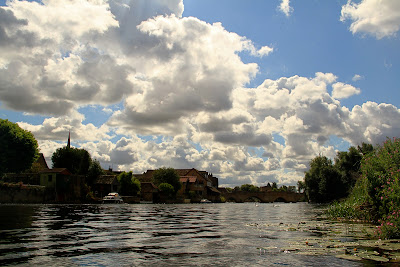 By now our backs and arms were aching and stiff, especially around the top of the neck. Once we picked up a good rhythm, the pain was easily adjusted to. Finally, we found a good place to pull over, and get the stove out for a quick half hour break. We set everything up, got Sky settled, and out of nowhere, we were surrounded and pinned against the riverbank by around 50 bull Cows. They were not too keen to have a fox-like dog sniffing around, and seemed pretty intent on killing her. Holding them off with our paddles, we scrambled along the bank and made a quick get-away, re-locating on the opposite bank around the next corner. At last! Mentos! 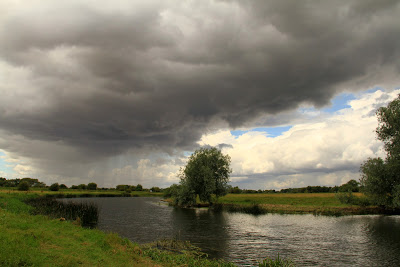 Chased by the storm

The distant, thundering storms on the horizon soon caught us up. We spent the next leg of the journey to Earith dodging sudden downpours, taking refuge under the over-hanging trees and bushes. We weren’t the only ones dodging the rain – Damselflies took rest upon perches under the trees as well.

Three hours and a whole load of muscle burn later, we made it to Earith. Little Egrets, Geese and Herons waded in the flooded meadows to our right. We stopped by the Marina to tie up and pop into the shop for supplies (more Mentos). A large splash behind Dads kayak… then silence. Like a scene out of Jaws, the water fell calm. All of a sudden, two dog-like heads popped up. A pair of Common Seals! Stunning mammals, one clearly younger than the other. Presumably the mother comes here to give birth, a fair distance from the sea!  Curious animals, as they checked out our kayaks, they swam around popping up behind us. A great way to lift our dampened spirits! 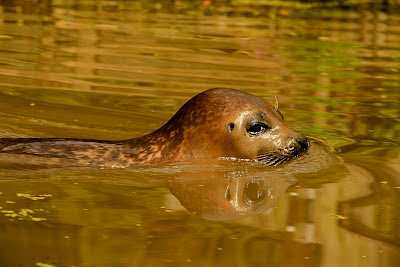 From this point onwards, the river changed. We decided to follow the rivers natural course, avoiding the canals of New and Old Bedford River. The transformation took us by surprise, as mans influence on this part of the river became massively apparent. Dredging and reinforcements along the riverbanks gave this part a sterile and unwelcoming feel, void of the bustling and thriving wildlife that had previously blessed the River Ivel and the early stages of the River Great Ouse.

Heavy storms and torrential downpours prevented much more progress through the evening. We warmed ourselves in the Lazy Otter pub, and waited for the storm to blow over. 20 minutes on, we set up camp. Just beating the darkness and rain. Oh how I longed for another cold, and lumpy nights sleep… We talked about the progress made, the things we had seen, and people we had met. Sky climbed into my sleeping bag. At least the stench of fish had long gone!
Posted by Tom Young at 22:34