I am going to have to apologise for the insane amount of photos in this blog. I wanted to get back home before I posted this blog, and it turns out the remaining trips were packed with lots of awesome animals, so I have let the photos do most of the talking (happy Haz??).

Have been given some binoculars to review… 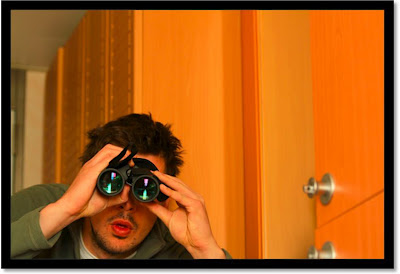 Great binoculars, but they do mess your eyes up after a while… 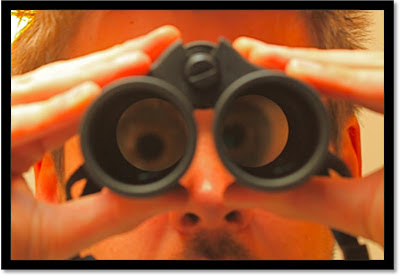 Instant weight gain, particularly around the neck, can be an issue after prolonged use… 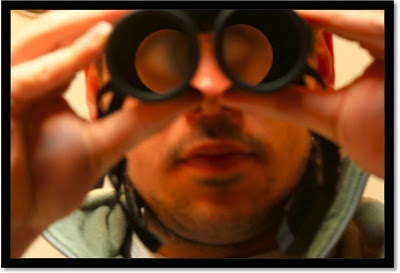 The sunset amongst a few streets of clouds… 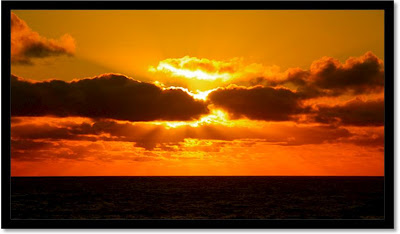 Coming into Santander the next morning, and I was still feeling a bit deflated, particularly as we had crossed the best part of the bay and had only seen a couple of Common Dolphins. I had a wonder along the sea front, and watched the Common Terns as they plucked small fish from the surface of the water. 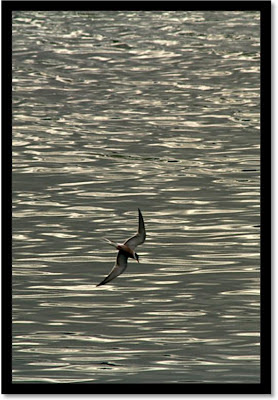 After watching them for a while, I was quickly reminded of how fond I am of their spindly flight, and charmingly angelic whitish good looks, topped off with a black hat and a forked tail. Phwoar! 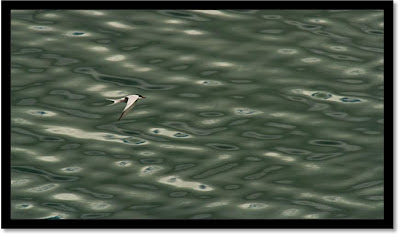 And as the ship pulled out, three of these were circling above the sand dunes in the distance… 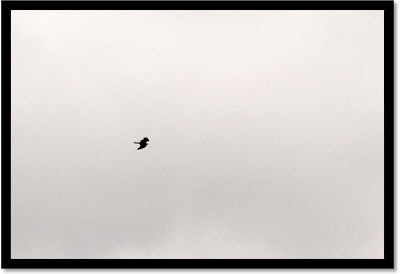 Black Kites! Darker and slightly less colourful variants of the Red Kites we get back home, but just as impressive!

It was a bit nippy on deck, but all of my negativity was about to be annihilated, and my enthusiasm for whale watching was to be re-ignited, in the form of my first ever FIN WHALE! 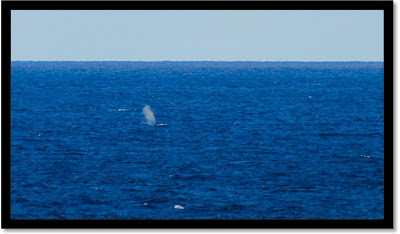 Or the blow of one at least! Being the second largest animal on the planet, at up to 25 metres in length, these guys are only just pipped to the post by the humungous Blue Whale (30 metres). This was shortly followed by another blow. A much smaller, bushier blow, that I reckon was of none other than the largest of the toothed whales, the Sperm Whale! 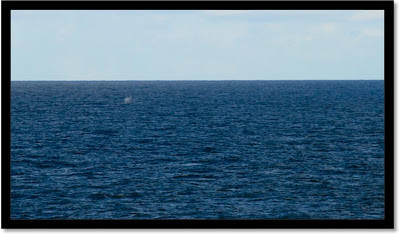 Impressed? Haha – I know, its just a white smear just off of the horizon, it is a shame about the distance from the animal issue. Something that we never seem to suffer from with these acrobatic charmers… 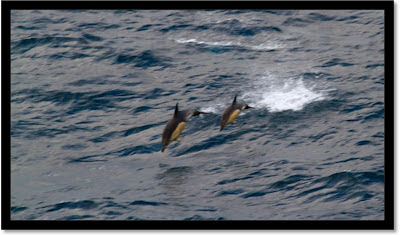 We were well on our way into the channel after leaving Portsmouth, the sun was setting (again), the water was insanely calm, and I had just put my feet up by the bar window with a beer, when the Spanish bloke next to me starts wailing and waving his arms to his kids. I asked him what he had seen, he had no idea what I was saying, but he managed to understand my badly pronounced Spanish for dolphin ‘Delfin’. He nodded. And then another one popped up. Harbour Porpoise! I ran for camera, and hit the deck. Missed them. Nothing else, but the sun, setting over the flattest sea so far… 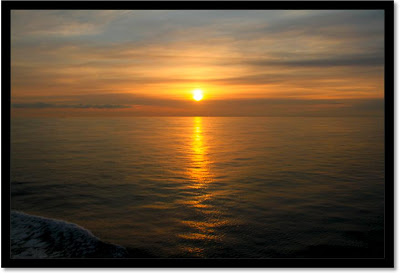 There were tonnes of sightings the next day, mostly from people telling me that they saw blows while I was at lunch, or they saw a load of blows on the other side of the ship. Because the sea was much calmer, I got to see a Fin Whale, with its fin this time! 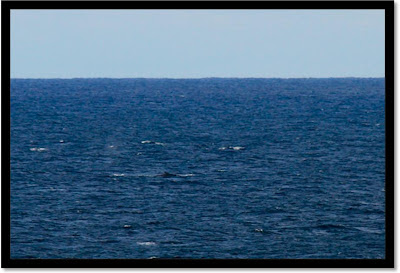 Once again, a long way off, but nevertheless, a great sighting! Fin Whales are a different colour on one side of their body to the other, called asymmetrical pigmentation, quite a rare thing in the animal kingdom! The right side of their head and baleen plates are pale, almost white, whilst their left hand side of their head is dark grey. A bit like the semi-albino man who used to run the corner shop in Stotfold. Later, more Common Dolphins leapt from the surface, able to reach speeds up to 30 mph! 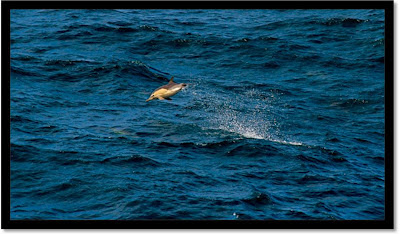 A huge splash was spotted in the distance, followed by the silhouette of a large whale leaping fully clear of the water, before arching and crashing back down into the sea. Spectacular sight. Repeated at least four or five times before disappearing into the oceans depths. After much cropping and enlarging of some long shots, I reckon it is a type of Beaked Whale, be it Northern Bottlenose, Cuviers’, or something more unusual I have no idea. 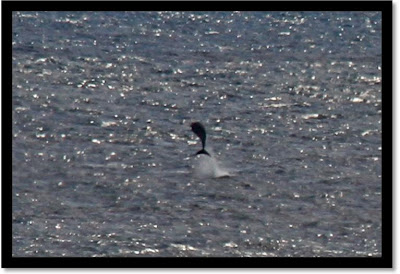 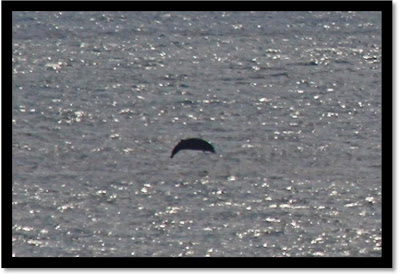 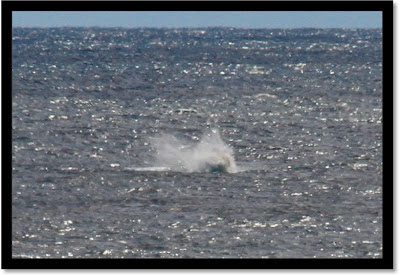 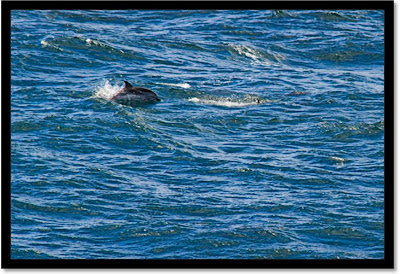 A Whimbrel, a migratory wading bird, moves North along the coasts from Africa to Northern Europe to breed for the summer. This guy passed the ship as we were about to come into Bilbao. 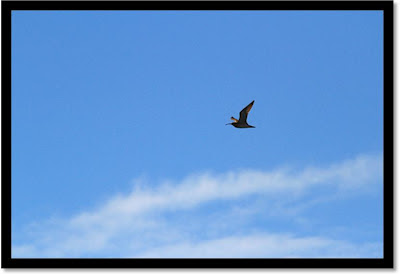 I passed out on my bed after dinner, by the time I had woken, it was dark and the ship had left Bilbao. I woke the next day in the channel. The sea was choppy and the wind strong. Worth a gander, but no luck.

Later the next day, after we had crossed around Brittany, and into the Bay itself, we saw probably the largest pod of Common Dolphin to date. At least 30-40 individuals, young and old, popping up everywhere! I didn’t know where to look! 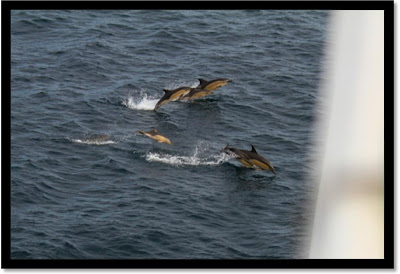 How cute is the tiny (but out of focus) calve in the middle! 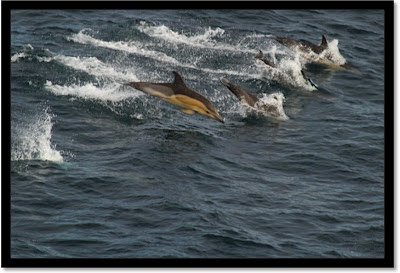 Could you imagine how awesome it would have been if I had got the shot about half a second before this, when all four would have been in mid-air? One day I will get a photo that does these amazing animals justice! !

The sea has really got rough, waves are pounding the sides, sea spray smashing into the windows and fizzing over the top of the ship. 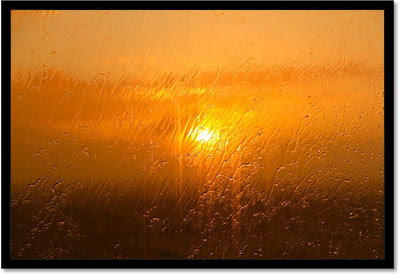 My final trip on this stint, and it feels like I have been on here forever! I am looking forward to walking through a long grassy field, the sound of bird song rippling through the airwaves, kestrels hovering, buzzards soaring, herons squawking, kingfishers diving, tits eating my nuts, just the thought of it… a true thigh rubbing moment!

Zak has joined me on board for this trip, the guy replacing me for the next two weeks. Unfortunately the forecast was terrible, and even more unfortunately, the forecast was correct. Plates crashing off of tables, glasses exploding against the floor, literally anything not tied down flew across the room! Exciting to say the least! 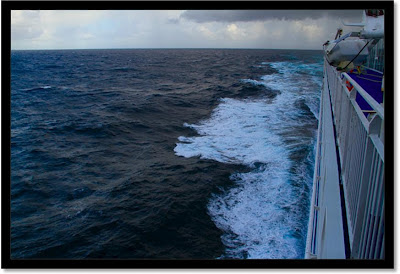 Some Common Dolphins did show their faces before we hit Santander, but I was really looking forward to getting off to see some more of the Common Terns… 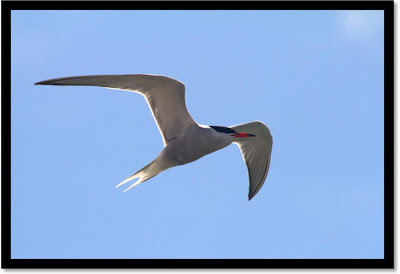 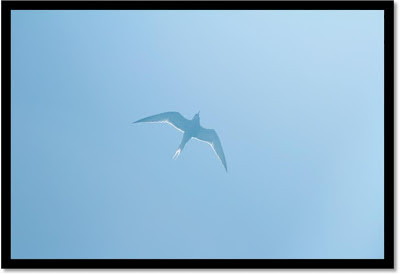 After a decent train journey home, my pits bursting with sweat from carrying my life on my back, I am currently enjoying watching the Blue Tits nibbling on nuts (peanuts), Long Tailed Tits nibbling on balls (fat balls) and taking Sky over the fields… 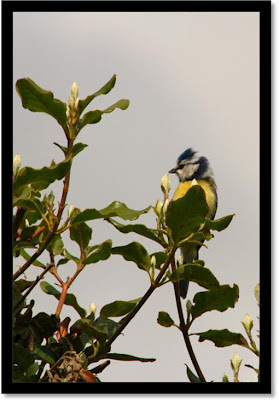 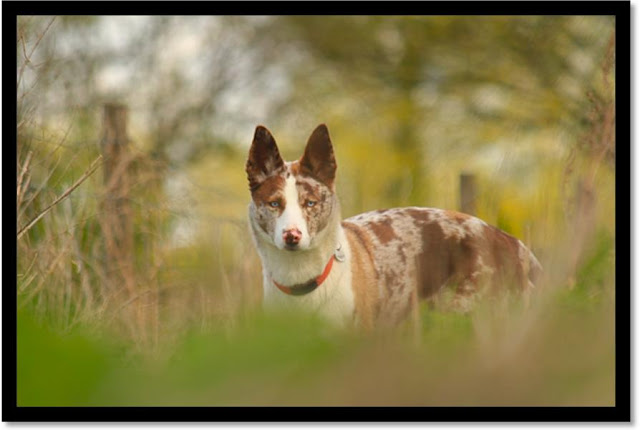