An Eel, Poo and Rainbows..

Hope you are all well and enjoyed the previous blog!

The inevitable has finally happened. People are falling asleep in the audience!  And then, two hours after one of my lectures, a man proceeds to ask me ‘erm.. have you seen any… ermm… you know… erm… any of them fishes?’ You serious mate!? Shortly after, the ship breaks down and would you believe it, people make jokes about sinking. We see a pod of six Common Dolphins. Here are two of them… ermm… you know… fishes… (One of them juvenile) …and then I see nothing else all day. That’s the magic of whale watching. You can stand there, freeze your arse off, stub your toe on the stupid bits of metal that prod out at the bottom of the railings, and not see anything all day. I was only looking for seven hours. Just glad this didn't land on my head… It’s the first photo I have seen with a gull’s excrement literally halfway through being excreted. Like a squirt of full fat milk. Interestingly, birds poo and wee from the same hole, at the same time, hence the more solid squidgy central part, surrounded by a wonderfully white splat. 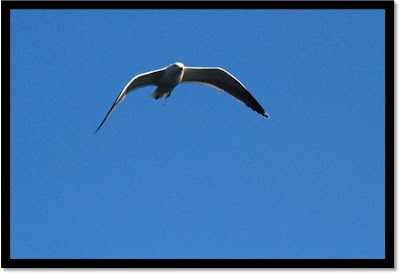 EELS! Comin atchyaaa! Never seen an eel at the surface before, potential discard from nearby fishing vessels? 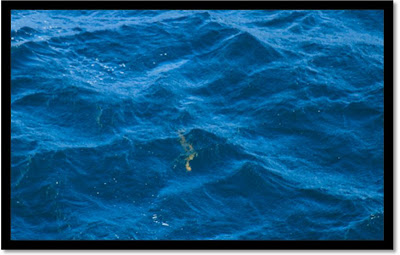 The following day was fairly successful for whaling; smallest crowd at presentation, but at least no one fell asleep. Immediately after the presentation, a pod of six Common Dolphins powered towards the ship… 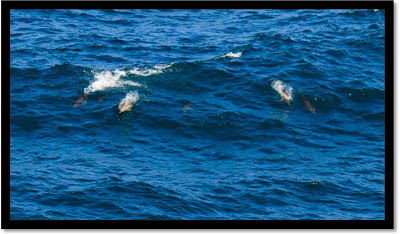 A (what I think) is a Beaked Whale, breached about two km from the ship. I am going to post the photo, very reluctantly. It’s terrible, if it was a mackerel leaping as this beaked whale did, I would have trashed the photo, never to have to insult anybody’s eyes ever again. So in advance, I apologise, but you must appreciate it is the first breaching whale I have seen so far this year! 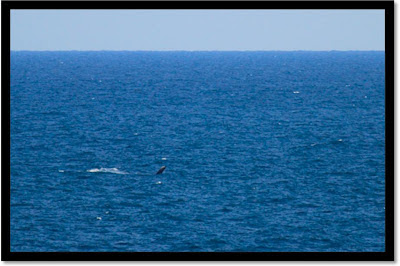 See what I mean! Can you even see it?!

Starting off in the channel, we wouldn’t be into the bay until late evening. I popped out on deck a few times, but no luck on the cetacean front. Some real nice looking rain clouds on the horizon though… 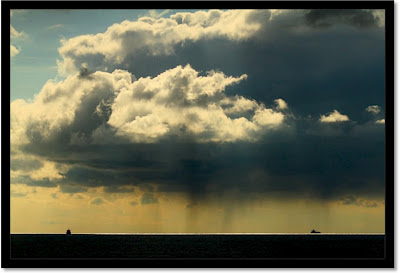 Early start, but before I could settle in to the deck watch a few hours before we docked into Santander, we had alert rehearsals (luckily no life jackets this time, I just followed one of the barmaids around, lots of French!). After that, I got up on deck, where I was joined by a dedicated bunch, a couple of post grads from Sheffield University, that didn’t mind getting a bit wet in the mean time (they were also pretty good at throwing bean bags into a bucket on each others heads, but not quite as good as the wasted Spanish truckers!). No whales, but after about 10 minutes our first Common Dolphin popped up next to the ship. Followed by a pod that approached from far off. Then another pod joined the ship, followed by more coming from the horizon. Both adult and juvenile Common Dolphins. Totally awesome! Great to see some young dolphins as well, about half the size of the adults which can grow up to two and a half metres. In total, we must have had about 40 Common Dolphins around the ship, making it all worthwhile! Just a shame about the rain… 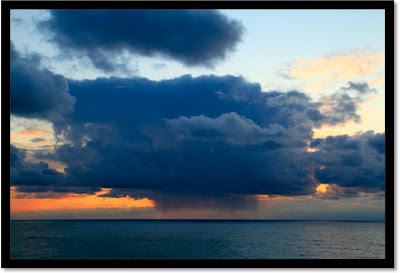 Presentation was a nightmare! Had to use posters. Because I am using my sisters’ mac, the cable to the television doesn’t fit. So I borrowed the onboard laptop. The hard drive has been trashed on that. So I borrowed the ship managers’ laptop. The memory stick infected her laptop, leaving me with a poster and my own memory to go through the whole presentation. It was shorter than usual.

As we left Santander the weather was still blowing a gale. Managed to see a few Common Dolphins again, difficult in the choppiness though. I wonder how they got their name?

A pair of Robins had joined the ship for the journey to Santander, and as we crossed into the channel heading back for Portsmouth, a Great Skua passed the ship, a huge predatory sea bird that will steal fish from Gannets and even kill smaller gulls, like the Kittiwake.

The sightings are getting very frustrating! The weather was ideal and the presentation went much better, I even drew up a map of the Bay, and cut and taped Cetaceans on them where you are likely to see them. 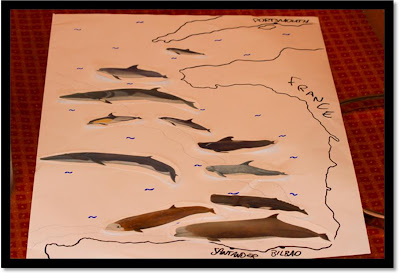 We saw two small pods of dolphins, one on the middle horizon, probably at least 10, but they kept low and moved straight past the ship. The second was of four Common Dolphins. They leaped clear of the water twice, before disappearing, never to be seen again. 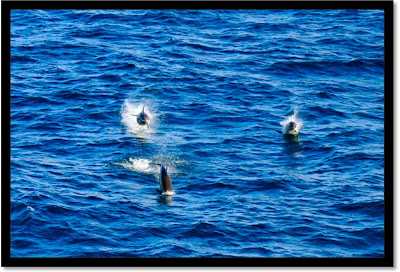 In the past four days, I have watched all 24 episodes of ‘24’ season four, courtesy of Gary and Lori. Kept me sane! And now I wake and we are just passing Brittany, and will spend the rest of the day in the channel, heading back to Portsmouth. Cetaceans are highly unlikely. But I will keep my eyes peeled nevertheless, probably more so for the birds…

Oh! Happy Easter one and all! Ignoring the religious guff associated with it, it is a great day for chocolate manufacturers, and chocolate consumers alike. Mmm… 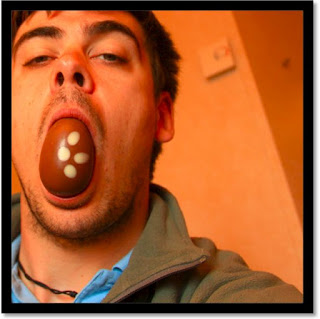 The sea was its roughest so far, and the rain made any chance of standing out on deck a lot more difficult. I decided to watch the sea from the window as it swells and falls in white peaks and dark troughs, still fascinating to watch, but a bit frustrating at the difficult viewing conditions. 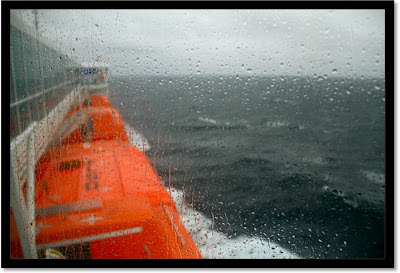 On the return trip, patches of sun broke through, like rays of hope, light refracting through the sea spray as it crashed against the side of the ship, and whipped me in the face, as I stood nearly 30 meters above! 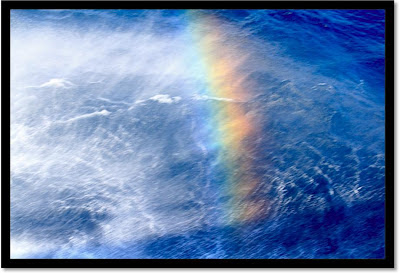 From that point onwards, the ship seemed to manage to bypass all the heavy showers… 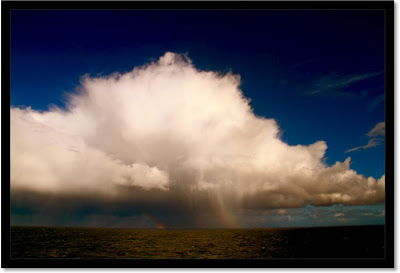 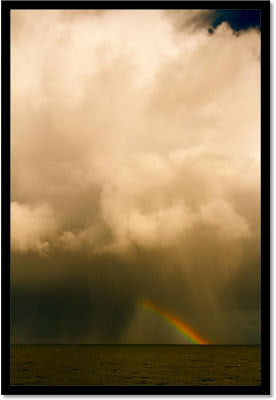 Another shot of a rainbow! 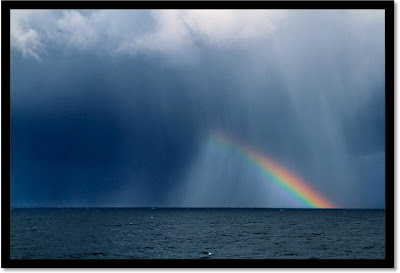 I probably got a bit carried away with the rainbow shots (poof). 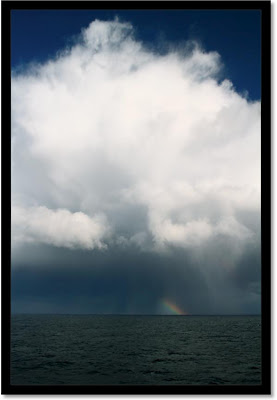 Just need some cetaceans! Until next time…