Keeping out of the sweltering midday sun has become necessary to prevent myself from melting into a pool of sweat. But this great weather does mean that the evenings and early mornings are perfect for getting out and about, and spotting all of the insects that are basking in the glory of the sun's warmth.

Blackbird chicks have dominated the top of the garden, with their cute dumpy appearance, short stubby tail and wide yellow mouths. I could hear the chirping of a chick underneath the hedgerow, so had a little rummage to see if I could spot the youngster. There, peering out of the undergrowth, the blackbird chick sat impatiently waiting for its mother to bring food to her.

Later that day, the chick had moved up to the top of the garden and bounced between cover to get fed.

But now, onto some of the insect highlights over the past week or so. Clinging to the silver-birch at the top of the garden, sawfly larvae hung in defense like the strongest of gymnasts. 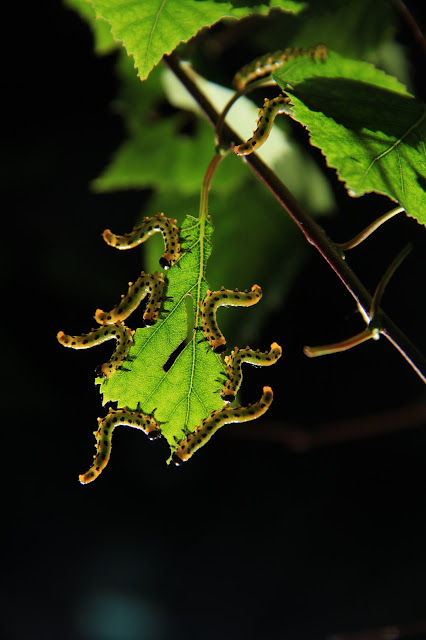 Not strictly an insect, but this beautiful garden treat definitely falls into the creepy crawly category. A, what I believe to be, garden orb weaver spider (correct me if I am wrong - the markings on the abdomen look slightly different!).

Working late has its advantages. Working late in a zoo built on the side of the downs helps too. A twinkle in the grass, at first I thought it was glass reflecting the torchlight. But upon closer inspection, the sparkling object revealed itself to be the glowing rear of a female glow-worm. My first glow-worm, and I was thrilled to see such a spectacular display of bioluminescence. Of course, this glow attracts the males which are glow-less but can fly.

The very next morning, I arrived back after a tour of the zoo, and was greeted by the cafe staff with a coffee mug with holes punched into the lid. Inside was an exotic moth, bright pink and black stripes across its abdomen, with a wing length almost the size of my palm. This was in fact a privet hawk moth, a species I have never seen before, and one that I thoroughly enjoyed getting to admire in such close proximity. Phenomenal antennae!


After my recent mini-garden survey in my previous post, I just can not help but look at the plants in the grasses. Whilst Rachael and I enjoyed tea and scones at the picturesque site of Houghton Mill in Cambridgeshire, I could not help but notice at least three grass species, directly underneath our feet! Not everyone shared my enthusiasm mind...


One particular advantage of having one of these more modern smart phones, is that their cameras are fairly decent, and are extremely portable. Because of this, I managed to photo the glow-worm, hawk moth, and casually snap bits and bobs quickly and easily without the need for the actual camera. Below, one of many fox-glove that have sprung up amongst the woodland around Ashridge...

Back home, and walking with Ellie, in the cool, warm evening sun. The air was warm, the tough grasses prickly against my calves. The sun dipped towards the horizon behind the woodland beyond the fields. The wheat glowed gold with the tint of the setting sun.

What a wonderful and sunny way to end a blog whilst I sit in my shorts baking hot in the midst of this heat wave that has swept the country! Thank ya'll for taking the time to read and/or gorp at some dodgy photos - expect a North Norfolk special in the next post!