Finally. The weather is ideal; comfortably warm enough to sit outside in the morning with a cup of tea, squinting slightly in the bright, low sunlight. Blackbirds and song thrush fill the air with their wonderfully refreshing song, whilst tits call with cheerfully repetitive phrases. My room is now warm enough in the evenings to leave the window slightly ajar, allowing me to hear the faint high-pitched squeak of echo-locating pipistrelle bats, as they hunt for insects that have taken flight in the night. The sudden change from the freezing conditions that gripped the country, to the warmer days of spring has unleashed all plants and animals that have laid dormant over winter.

Walking through Whipsnade was impossible to do so without coming across toads every yard or so. On a short walk through the zoo at night, we counted well over 80 toads. A mixture of males and females, chirping  furiously in an attempt to locate a mate and produce young.

Males, wisely, often ride on the back of females and get carried to their ancestral breeding grounds. Males will mate aggressively with females, latching on until she releases eggs for fertilisation, sometimes drowning them. In their somewhat blind desperation to reproduce, they will also attempt to mate with deceased females, or, if you are Rachael, a human hand moving them to safety from a busy road. Chirp!

To Dunstable Downs. My new favourite place to visit. Already violets scatter the steep chalk hillside here. Never have I enjoyed being and feeling so intimately close to wild birds of prey. Not for the first time, I pulled up in the National Trust car park, and being a big fan of the odd nap, I wound the seat back, and nodded off for half hour or so (Not bad for a 24 year old!). When I woke, as I opened my eyes, a red kite with its wings arched into a 'W' formation, forked tail balancing it in the strong winds, bombed directly across the front of my car. What a sight.

Rich red and brown in colour, grey heads and with white undersides to their primaries.That classic and diagnostic forked tail makes them easily distinguished from other large birds of prey.

Another red kite rose on the wind forced up against the side of the downs. Holding its wings stiff, the kite reached down to its talons mid-flight and tore scraps from the prey it most likely scavenged.

The red kites are a conservation success story, being brought back from near to extinction in the UK. And it is not just the red kites that love patrolling these hills. Kestrels hover, head motionless in the wind. Whilst buzzards soar in a circling fashion, with their wings stretched wide.

Olivia joined me after work for a walk on the downs, where we investigated some of the woodland in the area. Immediately, we stumbled across some entrances to what turned out to be a huge badger sett. The entrances appeared to have been used recently, nesting material strewn messily around the site, latrines full of their messy tar-like faeces, scratches set into the bark of nearby trees, and even badger hair caught onto branches by some of the entrance holes.

Curiously, the remains of an old, rusted car sat amongst the woodland. Slowly it has been reclaimed by the land, filled with dirt and tangled by new growth. What was strange, was to find an entrance to the badger sett  underneath where the drivers seat would have been.


Hair was caught on the shard of metal that hung from just above the sett entrance. There is something fascinating about the idea of human waste being claimed and used to the advantage of wild plants and animals. Something that would have been an appalling act of littering and dumping, has conversely become what appears to be a useful shelter and protected entrance to the badgers sett.


Even stranger, was the discovery of three skulls, amongst a heap of bones from a range of animals. Rabbit, as you would expect from an area prowled by aerial and terrestrial predators. Then what looked like the jaw of a cow, possible due to the grazing that has occurred on sites nearby. Two badger skulls, fairly close to the sett. And a third, very similar in size and shape as the two badger skulls; it had the same dentition, but lacked the sagittal crest that runs along the centre of the two badger skulls, instead fused by two separate fibrous joints. Confusing indeed.


Whilst eating sandwiches, a spotted wolf spider came crawling out of the undergrowth.

Back in Langford, and a red lily beetle perched on a blade of grass in the garden. Luckily flying off before I cut the grass. Apparently they devastate lilies and are a burden to gardeners.

Quite frankly, I am a red lily beetle fan. A very good-looking insect, that can ruin any of my lilies any day.

Back at Whipsnade, and a metallic trill echoes through the woodland. Faster paced than the cackling of the green woodpecker, and a lot tinnier. A bird lands on the trunk opposite. The wonderfully slate grey back, separated from its chestnut orange underside by a black eye band running back from its bill. Reaching its head out, it eyes up its nest hole. Then dashes into the nest hole where a branch used to be. Packed with dirt, the hole is now only big enough to fit the nuthatch through.


Nuthatch are hot on the heels of the treecreeper for their amazing ability to effortlessly scurry both up and down tree trunks and branches.


And just below this wonderful bird, the newborn wild boar piglets charge around and snuffle through the mud, imitating their boisterous mother. Cute or what!?


And I shall end with this photo of Ellie, enjoying the cool River Ivel on one of our sunnier days.... 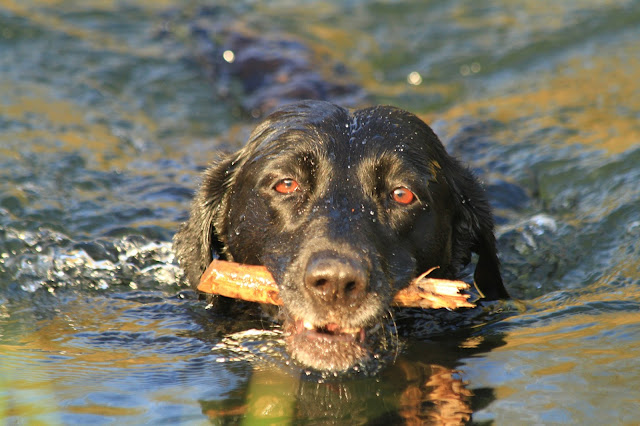 Expect some butterflies and some bloody faetus' in the next blog.... Bet you can not wait!